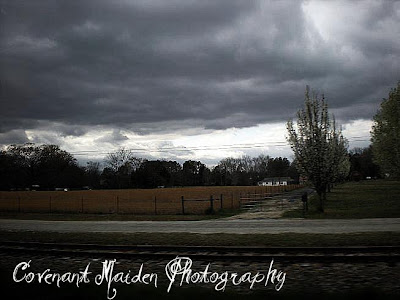 It was 1:00 A.M.  Sweet, dreamless slumber was roughly interrupted as Daddy woke up everyone in
the house.  Foggy-brained and sleepy-eyed, we kids followed him, almost blindly we groped though the lighted house.  Yawns that could not be suppressed almost split our faces.  Not until Daddy's pressing "Hurry, no time!" did we actually begin to understand the urgency.  Earlier that day the weather forecast had warned of the late-night upcoming storms, even an issued tornado warning.  Daddy had stayed up that night to keep an eye on the imminent storm while the rest of us went to bed, very unaware that we would soon be shaken abruptly awake from sleep.  Nervous, hurried, and even scared, we all grabbed pillows frantically and followed Daddy and Mama to their spacious closet.  There we all (excepting Daddy who was keeping a constant eye outside) huddled down together.  A big possibility of a tornado heading our way was the weather forecast's message.  The weather radar on Daddy's phone confirmed this.  The atmosphere was tense and our apprehensive chatter did nothing to calm jittery nerves.  Beside me sat Reb, and I put my hand affectionately upon his head.  Clara Mae, just in front of me, had her pillow held tightly over her head.  Her lips were white with fear as her seven-year-old brain mulled over one thing: tornado.  Her slender little body quivered and trembled. Liberty, who's sleep had been so rudely broken up, cried, more from sleepiness than fright.  The older ones, if they felt any fear, did not show it much.  With my knees pulled up to my chest, I looked from one family member to another.  Truth be told, I was crazy with fear inside.  I did not show it because I did not know for sure whether the tornado would actually hit us.  But fear nevertheless coursed through my body, making me feel cold and hot at the same time.  A mattress resting outside the door lay in wait for Daddy to throw over us just in case the tornado came.  Dread rose in my throat as I thought about that specific detail.  What if Daddy didn't make cover trying to save us?

A terrible realization hit me.  What if our house was beset by the raging tornado and we all perished?  Put rather bluntly, what if we all died and did not live to see another day?  The thought upset me.  No one wants to die, no matter how much faith they may have in Christ or how much they may want to escape life's problems.  In the bleakest moment, no one wants to die.  Although death is inevitable for everyone eventually, we all will try everything in our power to delay the inevitable.  I felt that I, at sixteen—almost seventeen—years old, had no right to die.  My whole life was ahead of me.  There was so much I wanted to do and experience in life.  Or what about little Liberty, who had even more life ahead of her, only almost two years old?  "It's not fair!" my heart cried as practically certain death seemed to stare me in the face.  Perhaps I was a bit hysterical and imaginative, but that is what fear does to one.  Someone looking at me from the outside would not have guessed my inner struggle.  Perhaps from the outside I was cool, calm, and collected, but inside I was scared, shaking, and stiffened with fear.  But what am I to judge who should and should not die?  Only God has that authority.

Then the thought hit me.  I had not spoken one prayer to the Master of the [seemingly] uncontrollable storm.  As a matter of fact, He had every bit of control over it.  I wanted to cry.  My first thought should have been a prayer to the Lord, but instead I had been assailed by doubts and fears.  As I looked from face to worried face, the only thought that flowed through my brain was "God, save us. Lord, protect us. God, save us."  As much as my flesh didn't want to admit it, God held our lives in His hand, as well as the direction of the storm.  I had no real reason to be frightened, for He would do everything according to His will, whether our lives would be surrendered for His glory or not.  We may not know what tomorrow brings, but we can know that it is always completely in His hands.

To sum up a long and descriptive story, the tornado did not come within a mile of our house.  However, as the next day came, we learned that it had reached the outskirts of Barnesville, a small town about five miles from us.  That sobered me.  Just how close can death come and just barely miss the target?  My record experience is five miles.  And it was all by the grace of God that my family and I escaped.  I was sobered beyond anything that I had ever experienced.

A tornado's wrath is extreme and horrific.  When I awoke at 10:00 A.M. the next morning after a long and eventful night, I cannot begin to describe how thrilled and excited I was to see the blazing spring sun shining brightly through the window.  As I basked in the sunlight for a moment I stopped to give God thanks for His mercy, grace, and the blessing of a new day.  I'll admit that usually I take my life for granted—all the busyness and daily routines—even my time with my family.  But the night of April 27 was sort of an epoch in my life, making me realize that life is fleeting, truly fleeting in the sense that we do not have much time on earth.  Every day God gives us is an immeasurable blessing, one we should not throw away lightly.

We also learned later in the day of April 28 that a couple was killed in the storm's path right outside of Barnesville.  Other tragedies have occurred throughout the entire South.  Those who have lost loved ones need our heartfelt prayers to the Almighty.  May we all have the courage to say, "The Lord gives, and the Lord takes away: blessed be the name of the Lord!"


Tales of Tragedy here and here.

You can listen to Covenant Commission's radio broadcast the Just and Unjust Alike.
Posted by Rachel at 5:21 PM

Praise God you all were kept safe! <3

Thank you, Amy! Yes, praise Him indeed for His marvelous mercy and grace!

God is good! I have enjoyed purusing your blog, you have a beautiful set-up and I see Jesus established in your heart through your words and pictures. He's the God of the quiet streams, as well as the raging storms. Grace and peace, Kellie (nothinglessthanbread.blogspot.com)

Thank you, Kellie! You are so right: God IS good! Thank you for stopping by with your sweet words of encouragement. God bless you! 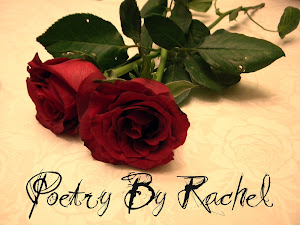 "Fiction is to be sure the very life and soul of poetry. All poets and poetesses have been indulged in the free and indisputable use of it." ~George Washington

"A good book is the best of friends, the same today and forever." ~Tupper

"The man who does not read good books has no advantage over the man who can't read them." ~Mark Twain

Something to interest you perhaps? 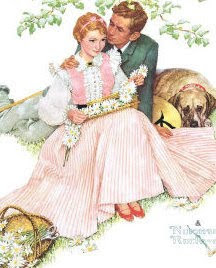